Heaven 17, please remember, were not even intended to be a group. In the beginning was the British Electric Foundation, or B.E.F., for short. Born out of the collapse of the original Human League, and the brainchild of Martyn Ware, that band’s leader, B.E.F. was less a record label, as a portfolio of future musical projects of which Heaven 17 would be just one. Ian Craig Marsh, co-founder of the Human League, would join Ware along with Glenn Gregory as lead vocalist the man who would have been the original Human League singer had he not been unavailable.

B.E.F. would produce the now iconic Music For Stowaways, and Music Of Quality and Distinction 1, and provided a template that subsequent artists would use from The Assembly in the Eighties, Electronic in the Nineties, and most recently, the Damon Alban and Jamie Hewlett project, Gorillaz. But its Heaven 17 which would endure and help shape the future of modern music for over thirty years. Their first album, Penthouse And Pavement, is, and remains, a modern classic.

It felt like a race to get the thing done really. There was no mediation involved. It literally was a lot of ideas coming out simultaneously but also with an intensity which meant that you could realise them very quickly. So it wasn’t just like a million ideas and actually three quarters of them were shit when you looked at them on the day – they were all pretty good I have to say. It was like opening a giant tap for a hose and it was just blasting out. (Martyn Ware)

Within a week, they had written and demoed a new song, ‘(We Don’t Need That) Fascist Groove Thang.’ Listening back to a song written in late 1980, it’s astonishingly prescient. The purely electronic template, the driving musical philosophy of the Human League, had been modified with the addition of funky slap-bass guitar, and treated dance-floor piano. Released as a single, it became NME’s record of the week. The song managed to mention the words ‘fascist’, ‘Hitler’, ‘racist’ and was promptly banned from being played by the BBC. ‘One of the reasons the BBC said it couldn’t be played was they thought Ronald Reagan could sue them over it’, said Ian Craig Marsh in 1981 about the song’s most controversial couplet: ‘Reagan’s president elect/Fascist god in motion.’

Penthouse and Pavement is a musically schizoid slab of modern art. Side 1 fires off in the new, funky direction, whilst Side 2, the all-synth side gives a taste of what a third Human League album with Ware and Marsh on-side might have sounded – wonderful melodies and audacious arrangements with tracks such as ‘Let’s All Make A Bomb’ and ‘Song With No Name’ the very best of British electronica.

A defining feature of Heaven 17 was their total artistic control over their music. Whereas the sound and the success of the Human League’s Dare was very much a collaboration between the band and Martin Rushent, Heaven 17 were performers, writers and designers creating not just their own music but every aspect of the music’s presentation and packaging.

It was written into our contract that we had complete control over the content of what we presented. Each stage of production was integral to the band’s ethos, from cover artwork to their own sartorial elegance in video and on photo shoots. We were influenced by Kraftwerk because what they presented was this world view of which the music was an integrated part. (Martyn Ware)

Heaven 17 and B.E.F. were unique and completely radical. Simultaneously, a critique and a postmodern embodiment of early-Eighties corporatism, they were too clever by half for many who didn’t get the joke. B.E.F., and Heaven 17 made it all into a straight-faced spoof of oppressive and unimaginative corporate industry, by creating one based on fun and intelligence’, says John Foxx, another electro pioneer of the Eighties:

No-one else was operating like that at the time. The nearest in spirit were perhaps the Residents or Devo, but they weren’t co-opting classic pop performers into their records. I was pleased they used my studio as base for a while – great to meet Tina Turner and Hank Marvin – and Sandie Shaw, too. Weird juxtapositions that made everyone look again. It restarted Tina Turner’s career right away. What a marvellous woman – dirtiest laugh I’ve ever heard. They’d effectively deconstructed the notion of a band and thrown the door open to include everyone they admired, bringing all those genres into their world, and onto their records. A very bright notion. Generous and open hearted too. Not something you get a lot of in popular music.

Their next album, The Luxury Gap, was their pop masterpiece, the moment when everything just clicked into place to devastating effect. The bands favourite-ever song, ‘Let Me Go’ so nearly broke them into the UK Top 40. There would be no such disappointment with its follow up. The band convinced their sceptical record company that ‘Temptation’ had to be the next single. A duet between Glenn Gregory and Carol Kenyon, this song of lust, brilliantly framed by a musical structure which just kept building and building, Escher-like to an electric orgasm that seems never to come, it reached Number 2 in the UK charts in May 1983. Martyn Ware:

Every gig we do, in any circumstances with any demographics, that song always works. I could play it on a guitar in a local pub and it would work. I could do it on a tin whistle in St Kilda and it works! I can talk to anyone I’ve never met before, any age almost, and they all know what it is. It’s just bizarre. You would be Abba if you could continue writing that over and over again.

In September 1983, Heaven 17 appeared on the front cover of Smash Hits, the teen pop bible, and now, sure evidence that they had now become part of the pop firmament. ‘Come Live With Me’ the tale of a doomed love between a thirty-something and a teenager, and ‘Crushed By The Wheels Of Industry’, a sardonic look at mass unemployment set to a party beat cemented Heaven 17 as one of Britain’s most important post-punk bands.

For their next album, Heaven 17 pulled off that most difficult of tricks. How Men Are was a set of experimental tracks which were also pop songs. Although it spawned hits ‘Sunset Now’ and ‘This Is Mine’, the band’s popularity had peaked, and although they remained productive and always intelligent, Pleasure One (1986), and Teddy Bear, Duke, and Pyscho (1988) lacked direction.

With Ware now a successful producer for the likes of Tina Turner and Terrence Trent D’Arby, Heaven 17 was put on hold. Bigger Than America, released in 1996 showed their muse returning, but it would be Beforeafter in the Noughties which would show the band back on top form. ‘Hands Up To Heaven’ was a huge US Dance smash.

By the late 2000’s, Heaven 17 were down to two of their original members, Ian Craig Marsh having left the band to take a degree course in Psychology. Yet demand for Heaven 17 live which had run dry a decade earlier had now picked up dramatically. A whole new generation of artists began to sight Heaven 17 as prime influences, not least La Roux who would join Heaven 17 for a storming session for Six Music in 2010.

Heaven 17 then toured their classic album Penthouse and Pavement, with a power and fidelity, yet a contemporaneity which made the music as alive today as it was in 1981 with soul singer Billie Godfrey now an essential part of the live dynamic. Heaven 17, who had largely refused to play live during the Eighties had re-invented themselves as a powerful live act. Glenn had never sung better in his life. On some nights, he would even play a cheeky acoustic version of that other Sheffield band’s biggest hit, ‘Don’t You Want Me.’ ‘Don’t tell anyone I can play the guitar; it’ll ruin me electronic credentials’, Glenn told the audience at the Magna Centre in 2010.

The band would also play on Later…with Jools Holland to a rapturous reception, and would appear on BBC Children In Need. The band’s highest profile year since the Eighties was capped off by a tongue-in-cheek appearance for Plusnet, a Sheffield-based broadband provider.

In October 2011, a reconstructed Music Of Quality And Distinction concert at the Roundhouse on night one (featuring original artists from the projects such as Sandie Shaw, and new talent such as Polly Scattergood) would be followed on the second by a dramatic reconstruction of their biggest commercial success, The Luxury Gap.

The Luxury Gap has never been more relevant. Written during the height of Thatcherism by three Left-leaning young men against a backdrop of over 3 million unemployed the parallels with the Austerity Britain of today are obvious. Today with a Millionaire cabinet, bankers’ bonuses, yet with once again three million unemployed and doom and depression everywhere, Heaven 17’s sly, post-modern critique of modern society has never sounded so resonant, nor been so necessary.

David’s book, Electric Dreams: the Human League, Heaven 17, and the Sound of the Steel City, will be published by Aurum Press later in 2012. For more information about David’s work, visit www.david-buckley.com 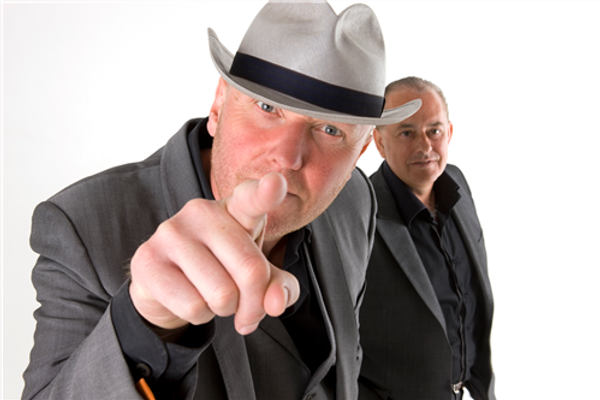